There are a couple of posts on this blog and website that for whatever reason I have really put off writing for days. It might have been bad news or I might not have been feeling particularly well, and it would only be when someone would ask innocently: ‘Have you updated your website yet?’ that I would get down to it and start writing.

Thankfully, this isn’t one of those occasions. Driving home from Manchester yesterday, I couldn’t wait to start typing. Not because we’d had a landmark scan or particularly good news or anything – but because I just felt really, really good.

It’s amazing what can happen in two weeks.

On my last couple of blogs I mentioned how back pain was becoming a really, genuinely big issue for me. The nodule in my T8 vertebrae had caused a compression fracture in my spine, and that in turn had messed with my ribcage and chest. I had a bump over my diaphragm and lumpy ribs all over my right side. I was taking tramadol and paracetamol every six hours and waking up in the night because of the pain, and wouldn’t go anywhere without strapping a hot water bottle to the site of that pain.

It sounds silly now, but I still thought I was doing OK despite all that. I accepted it was as a result of the spinal nodule and I tried to cope as best I could. But it was clear to all who saw me that I wasn’t really myself.

So how has all that changed in such a short space of time? One simple blast of radiotherapy – and a change from tramadol to morphine – seems to have done the trick.

In my last blog – which I published a couple of days before the radiotherapy – I mentioned how fundraising had allowed us to stay in Manchester for three days of treatment, rather than the usual one. And that was because I was due the radiotherapy as well as the usual 60-minute infusion of Nivolumab I have every two weeks.

The radiotherapy suite where I was zapped. From the outside it almost looked like a posh spa, which made me feel a bit more relaxed!

On the first of those three days I prepared for the radiotherapy. I had a permanent dot ‘tattoo’ inked on my chest for the procedure and met with a doctor who talked through my options. He said I could have the radiotherapy that day – a day before the Nivolumab – if I was desperate to get home and not stay in the city. Otherwise we would push on with the original plan and have it the day after my treatment. Our decision was to have it on the day after – specifically because of the fundraising and the fact that our hotel was already booked. And thank God we did!

The radiotherapy itself was fine – I just lay on a board and let a big machine zap my back – but my body’s reaction was not. Doctors had warned me that the pain would get worse before it got better, but they said that it would probably kick in after a couple of days. Instead, it happened immediately. They think I had what’s called a tumour flare, when the area around the tumour (or the tumour itself, I’m not sure) becomes inflamed and basically causes a serious amount of pain. The journey back home was horrendous and the pain stayed with me for hours. It was agony and the 20mg of morphine I had taken for the first time that morning had done nothing. I took some fast-acting liquid morphine on top of that and, again, it didn’t touch the sides.

At home I just lay on the sofa and dared not move. I couldn’t even eat and just had to wait it out and hope it would go away. My GP actually came round late in the day which was great although, thankfully, by then the majority of the pain had gone.

And since that day? It’s just been great. I’ve halved my morphine intake, slept like a baby, had a stronger appetite, laughed more, talked more, walked more and generally had a great time with great people. As I told the professor overseeing my treatment yesterday – I feel like a new person.

And having that brilliant new feeling has really made me want to do more and get out of the house more. Yesterday we even joked that we should see if any tickets were left for Man City’s match against Real Madrid after my treatment. Thankfully we didn’t, because it ended 0-0!

However, at least I did get to do some exploring a couple of weeks ago. Limited exploring because of my back, but I still got to see for myself that Manchester really does exist, and isn’t just a place made-up by hospital nurses to ensure they can converse with patients!

Me and Gemma at the Trafford Centre’s Food Court, which was massive!

Our first stop was the Trafford Centre, a massive place filled with shops and restaurants. We did some window shopping before grabbing some dinner in the really impressive food court. It was an awesome evening even if I was starting to feel real pain on the way home. On another night we also enjoyed dinner at the hotel with my cousin Bernie, who’s living in Manchester, which again was awesome and got me really relaxed ahead of my treatment.

But the other place I really wanted to see was Old Trafford, the home of Manchester United. I’m not a Man U fan obviously (apart from in 1996 when my six-year-old self was hunting glory) but it’s a place I’ve always wanted to see. I was a Coventry City season ticket holder as a kid but never followed them away so never saw a game there. And I had just started university in Brighton in 2007 when we shocked them with a 2-0 win in the League Cup, so couldn’t join the 11,000 fans who headed up north. A newspaper match report cut out would be blu-tacked to my wall for the entire year to show everyone just how gutted I was that I missed it. 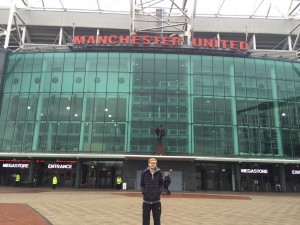 A quick trip to obviously impressive Old Trafford was an awesome distraction away from the business of my treatment.

Unfortunately, I wasn’t feeling well enough to go on a tour of the ground so it wasn’t possible to walk on the hallowed turf that City goal-scoring hero Michael Mifsud had once graced. Maybe next time. But a drink in the ‘Red Café’ and a walk through the Munich Tunnel was enough to make me enjoy the visit. And I can now understand why the place sucks in so many fans from all over the world.

After the visit it was back down to business, and back to the hospital. It was time for my Nivolumab. I’ve finally written about the treatment on this website (click here to open in a new tab) but there isn’t much to report on my own experiences. After yesterday I’ve now had four cycles and haven’t yet had any side effects, which is brilliant. I feel good too, although it really is too early to say how it’s going. Nivolumab is a bit of a slow burner and the aim of the first scan is simply to get through it without any other big nodules showing up. Do that and you can then hope for really good results.

I should also add how lucky I am to even be on the treatment. It’s so new that the drug company which makes it is paying for me to have it, not the NHS. There are stories on internet forums of people who have been turned away from that process because they weren’t put forward earlier enough. I don’t know much about the process but I hope for their sake that it becomes available on the NHS soon.

Yesterday’s doctors’ strike meant lots of waiting around, which isn’t a problem at The Christie – mainly thanks to their ‘Relaxation Room’, a place for patients to chill and, in my case, watch the snooker.

Before my treatment I always have blood tests and see a doctor, which can take a while. And yesterday it was the junior doctors’ strike, so this process was understandably an even longer one. Apparently the morning had seen one doctor for 30 patients, which gives you an idea of how long we had to wait for in the afternoon. But everyone, included us, sat very patiently and I reckon the majority of patients – including myself – are on the side of those on the picket line.

One of my favourite doctors at The Christie is, I believe, a junior doctor. I saw him during my visit a couple of weeks ago and shared an interesting conversation. As I wrote earlier, I was still clinging onto the thought that I was doing ok and the pain in my back and ribs wasn’t that bad. During our chat, he asked me how bad the pain was out of ten. I said about a four. He hesitated for a second, before turning to my parents and Gemma and asking them the same question. I think he wanted a different opinion for some reason!

Gemma answered correctly that I’d been struggling to walk around the hospital that day, let alone do anything else. The doctor replied that that didn’t sound like a four out of ten, and he was right. He said to me that I shouldn’t have to put up with any pain, and that my quality of life was very important, although he also said that every patient was the same in pretending the pain wasn’t as bad as in reality. And with all that in mind, he was the one who prescribed me the morphine – another reason I like him so much!

My back has improved so much that I had this seat, instead of a bed, for the treatment. And yes, that is a Harry Potter book I’m reading!

So anyway, here we are – two weeks on. There’s been a lot to talk about so I hope it all makes sense! In between all of it all I’ve had dinner and a night of laughter with the Ajax to Ajax boys and their partners, had yet another amazing fundraiser – this time courtesy of Warwick Folk Club and the top man that is Keith Donnelly – and spent a day in the Cotswolds for my Mum’s birthday. I was even due down the Golf Range earlier today – albeit just for some gentle putting – and I’m hoping to the get out of the house again this bank holiday weekend.

There isn’t a great deal to shout about in terms of me getting better – we must remember that the radiotherapy treatment won’t cure the nodule in my back, only help ease the pain. But as I sit on the rollercoaster that is having this illness, I’ve most definitely been on the way back up.

P.S – I got home late last night and turned on the TV just in time to see Later With Jools Holland. On there was Christine and the Queens, some French singer that I’d never heard of. She started dancing and singing and for a second I thought I was watching Eurovision but it ended up making me both laugh and smile. After a long day it just filled me with joy for some reason. It’s really weird stuff I know, but it just made me happy. So I thought I’d share it!

This entry was posted in All My Blogs, Blogs About Cancer and tagged in Cancer, Health, Kidney Cancer, Man Utd, radiotherapy.

« Keeping Matt Sane #2: Sport
Ajax To Ajax And How Friends Have Made My Life Easier »
View more posts from this author